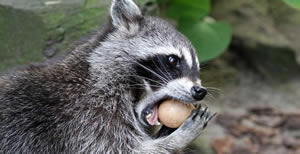 Raccoons have long been known to decimate bird populations by attacking nests and eating, or damaging the eggs. While this is a part of the natural world, an unbalanced population can cause many issues. Whether it’s a homeowner dealing with multiple generations of these masked bandits, or a farmer having their crops damaged, these predators can quickly overpopulate with the excessive food sources in certain locations.

Most at risk are the populations of ground nesting birds such as ducks, geese, and wild turkeys. These nests are often hidden among tall grass or marsh lands, but are easily found by the raccoons on their nightly scavenging trips. Keeping the egg eaters in check is another important factor in a successful management program.

Raccoons are omnivorous, eating both plant and animal foods. Plant foods include all types of fruits, berries, nuts, acorns, corn, and other types of grain. Animal foods are crayfish, clams, fish, frogs, snails, insects, turtles and their eggs, mice, rabbits, muskrats, and the eggs and young of ground-nesting birds and waterfowl. Contrary to popular myth, raccoons do not always wash their food before eating, although they frequently play with their food in water.

Raccoons breed mainly in February or March, but matings may occur from December through June, depending on latitude. The gestation period is about 63 days. Most litters are born in April or May but some late-breeding females may not give birth until June, July, or August. Only 1 litter of young is raised per year. Average litter size is 3 to 5. The young first open their eyes at about 3 weeks of age. Young raccoons are weaned sometime between 2 and 4 months of age.

Raccoons are nocturnal. Adult males occupy areas of about 3 to 20 square miles (8 to 52 km2), compared to about 1 to 6 square miles (3 to 16 km2) for females. Adult males tend to be territorial and their ranges overlap very little. Raccoons do not truly hibernate, but they do “hole up” in dens and become inactive during severe winter weather. In the southern United States they may be inactive for only a day or two at a time, whereas in the north this period of inactivity may extend for weeks or months. In northern areas, raccoons may lose up to half their fall body weight during winter as they utilize stored body fat.

Raccoon populations consist of a high proportion of young animals, with one-half to three-fourths of fall populations normally composed of animals less than 1 year in age. Raccoons may live as long as 12 years in the wild, but such animals are extremely rare.

Usually less than half of the females will breed the year after their birth, whereas most adult females normally breed every year.

Family groups of raccoons usually remain together for the first year and the young will often den for the winter with the adult female. The family gradually separates during the following spring and the young become independent.1

Contact Predator Control Services for all your wildlife management needs. We are fully licensed and insured to handle any situation.